Originally posted in April of 2015.

Sorry I wasn’t able to post last week but I was in Puerto Rico for a friends 30th birthday so I was busy doing beach things and exploring the island. Before I left I did make a really good spaghetti squash dish that I thought I could share today. It was my first experience working with spaghetti squash so I was surprised how easy and quick it was to make. I wish I had tried it sooner!

Spaghetti squash contains many important vitamins and minerals such as potassium, vitamin c, vitamin a, and dietary fiber. It also tastes great, and you can cook it in the microwave. Super easy. I know a lot of people like to substitute spaghetti squash for pasta, but that is not something I typically recommend. If you really want pasta, make pasta. Spaghetti squash is not going to cut it when you have a pasta craving. However, it is delicious so you should try it, not as a substitute, just as another food.

I typically use this recipe as a side dish, and will cook chicken or some other protein to go with it. Otherwise, I would be hungry like an hour later. You could always add some leftover diced chicken to the sauce to make this recipe more of an entrée.  Also, I bet a nice piece of crusty bread would go good with this.

Dash of Salt and Pepper

Rinse off spaghetti squash and poke several holes with a knife to allow steam to escape while cooking. Microwave spaghetti squash on high for 15 minutes. If your microwave doesn’t rotate make sure you turn about half way through cooking to ensure it is cooked evenly. Remove squash from microwave when finished cooking but do not attempt to cut it open yet. It will be very hot and needs to cool down for several minutes. Heat olive oil in a medium sauté pan on medium heat and add garlic and onions. Cook until onions appear translucent. Add mushrooms and tomatoes and cook for several minutes longer until vegetables are warm and mushrooms are soft and decreased in size. Mix in basil and oregano and cook for 1-2 more minutes to blend the flavors. Turn off heat and add a dash of salt and pepper if desired. Cut open spaghetti squash in half lengthwise if cool enough and remove seeds. Use a fork to scrape out strands and put each half on a plate. Top with sauce and serve. 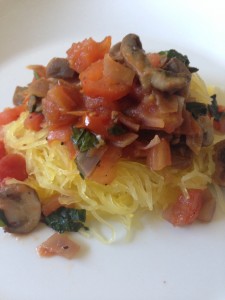 Baked Brie with Pecans and Pears

2 comments on “Spaghetti Squash with Fresh Vegetables and Herbs”