In December I was in a mad search for a healthy gluten free appetizer to take to a holiday party and I could not find anything that really struck my fancy. I found a few recipes that incorporated sweet potato rounds, which I thought was really interesting but they had guacamole on top, which sounds delicious and I probably will make that at some point in the future, but I wanted something a little more wintery and holiday-ish to bring. (If you are curious about the guacamole sweet potato appetizers, I have a few pinned on my pinterest page @DelishnNutrish) So I knew I wanted sweet potatoes as base, they are full of vitamin A, fiber and potassium and low in fat, making them a nutritional powerhouse, plus they are delicious. But what do I put on top? While I contemplated this I turned on an old re-run of Iron Chef America….and the secret ingredient was….mascarpone cheese! So i decided to make a mascarpone cheese topping with pecans to give it a little crunch (pecans are heart healthy and can actually help lower bad cholesterol) and some vanilla extract and cinnamon sugar. The topping turned out really delicious and the flavors melded well with the sweet potato base. You can actually do this recipe hot or cold, I went with hot but I think it would be just as good cold.

Preheat oven to 400 degrees. Wash sweet potatoes off well and slice in 1/4 inch thick rounds (Don’t peel the skin off).  Add slices of potatoes to mixing bowl and coat with olive oil. Add cinnamon and allspice and mix until spices are evenly distributed. Line 2 baking sheets with parchment paper and place sliced potatoes on parchment. Bake for ~30 minutes. While potatoes are baking, you can prepare the topping. Mix remaining ingredients together in a small mixing bowl (cheese, pecans, cinnamon sugar and vanilla) and refrigerate until potatoes are done cooking. After potatoes are cooked through (~30 minutes), remove from oven. (If serving cold, allow to cool) Add topping by the teaspoonful to each potato slice. If serving hot, put potatoes with topping back into the oven for a few minutes to melt the cheese. Remove from oven and serve. Makes 35-40. 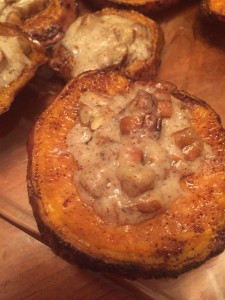